Now That You’ve Caught the Car…

A year ago, when I finally decided that I did want to do the Jefferson Science Fellowship program, I said I wanted an adventure experience, unlike anything I would likely have back on campus.  I said that I wanted a front-row seat for the challenge and complexity of governmental transition.  I wanted to learn about the language of statecraft.  Well, I hadn’t imagined that it would be like this.  But of course, that is the nature of great adventures.

I came into work today, the day after Thanksgiving, not because I was too work obsessed to stay home, but because we need some coverage at the desk.  For most of the world, this is just another work day.  Who knows what might be happening?  There are news stories about various Asian governments—how do they affect my science and technology portfolio?  Has the President-elect selected a nominee for Secretary?  Are there any more earthquake aftershocks affecting eastern Japan?  Yes, this is exactly what it is to be embedded in a regional bureau of a high-profile international diplomatic alliance.  And whether or not I knew it, that is what I was asking to learn.

The image I’ve had this week is that of a dog, just at the moment of catching the car it has been chasing, suddenly recognizing its success and now forced to ask a fundamental (even existential) question: Now what do I do?  With a little extra time today, I was able to find some versions of exactly that image.  I would like to say that it’s just coincidence that the contexts of the images are cars and politics, but I can’t really promise that.  I do know that one of the nicer (apolitical) images does come from a blog that extols the pleasures of driving Porsches with manual transmissions.

I cannot disagree with that philosophy, of course; it’s just that my time driving is limited these days to a few weekend visits back to Indiana.  After years of dreaming and theorizing about it, I really do have the experience of “getting up at home, going to the very familiar home airport, flying a couple of hours, landing at the very familiar home airport, and going home”.  I joked with a friend about “checking on the country manor on my days away from my suite of rooms at the capital, attending to affairs of State”.  Perhaps amusing, perhaps pretentious… but very apt (except that the house in Lafayette is not quite the country… but it feels like it compared to downtown DC).

There is even a broader political version of this question that grips Washington.  I don’t really want to spend my time engaged in national politics, but I do like the cartoon. 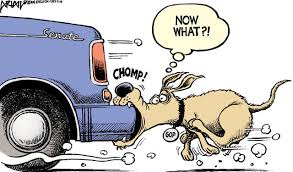 Although I did say I wouldn’t do politics, I do want to describe something very wonderful and remarkable that has sustained me over the past fortnight.  Every day, as I come to work, I get on the (public transit) bus with a number of other government workers.  The security guards are just as friendly and engaging as they check my badge.  I walk to my office, and there are still all of the elements of bureaucracy and statecraft on Nov 25 as there were on Oct 25.   Some of the questions I field, and media reports I read, are very different because of ecstatic elephants rather than dancing donkeys in the neighborhood.  But some of my colleagues remind me that this level of continuity would not have been the case in other places where they have worked.

Admittedly, there are protests and disillusionment and frustration; I think this would have been true even with the dancing donkeys outcome.  I have managed to miss the protests that are active a few blocks from my apartment—not because I’m uncaring, but because I need to have something constructive to do in the face of confusion and disorder.   My something to do is very concrete and actionable: support the science, technology and innovation elements of the U.S. – Japan alliance.  Living in Washington as an engineer focusing on the social context of technology development and innovation does give me a dual view of the world.  Understanding how technology works does change one’s view of how context matters, and how the stories that are told influence whether some innovation is considered a source of wonder or woe.  I am also challenged by what seem to be violations of my empirical approach: I have a theory about the way I want the world to work.  I have a set of data that conflict with that theory.  I will now try to force the data to fit my pre-existing theory, rather than try to come to a broader understanding of the world (and develop an improved theory) based on the data I have observed.

Maybe I would have enjoyed history and social science classes in high school and college more if I could have learned more about triangulation and context description and system dynamics.  But I don’t regret having this perspective, or even the sense of disorientation I feel when reading the news reports.  There is some very pretty math emerging about developing the right configuration of dynamic applications of inertial policy to enable critically damped responses to geopolitical challenges using an optimal steering strategy (which Norbert and Jay might have called Cybernetic Statecraft).  I have a close-up view of ways it’s working, and ways it is very poorly implemented (both now, and in the past).  More importantly, I need to be able to explain this to people who *are* historians and policy studies and language majors.

Well, that’s a pretty clear view of what I need to do next, and why it’s good for me to be here, right now, doing it.  Woof.