Although it was not that cold this winter, and we actually didn’t get a real snowstorm until after the Equinox, the real emergence of Spring here in DC allows me more time outside to appreciate my experience here and what I am learning during this Fellowship.  There are lots of features for me to appreciate on a sunny day, such as the cherry blossoms in bloom, or the re-awakening of the flowers in the courtyards, along my walking and bus riding routes.  Even my senses and sense of pace have been involved.  (In late March, I had surgery to remove a polyp that was taking over my nose and sinuses.  That forced a few days off, and a slower pace of activity while I was recovering.  Now, my sense of smell, already acute, is coming back online with even more sensitivity and range.)  It’s no longer the “time is money” or “he who hesitates is lost” lessons of childhood forcing me to rush to everything.  It’s April, and literally, it’s time to stop and smell the blossoms. 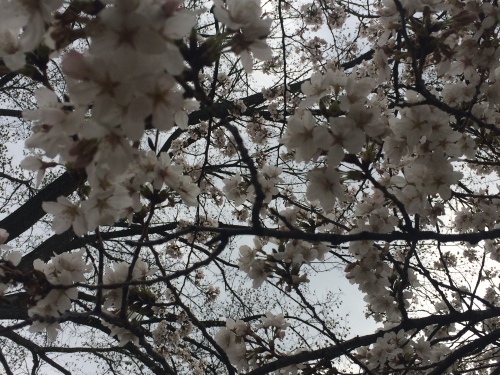 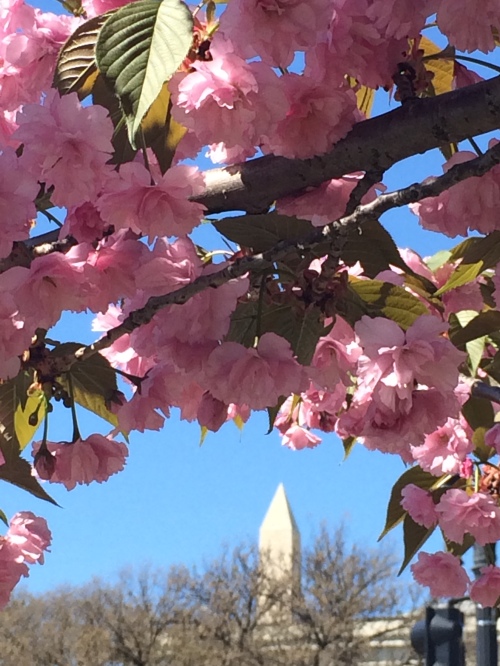 During one of these sunny, warm days, I came to contemplate the impact of my experience at the Department of State on my sense of *self*.  The look and sound of BSC in a suit and dress shoes, striding with purpose to his office at Main State, evokes a certain set of descriptions that aren’t really the same as BSC in a tweed jacket and cords and sneakers, keys jangling, walking around West Lafayette.  Oh, and don’t forget the shades.  A friend had asked me to send a picture of me in work mode, and so I did, wearing the classic Ray-Ban Wayfarers (they’re actually a vintage pair, with my own prescription inserted), standing in front of the Department of State sign (and taking care not to use an angle or direction that would disturb the Diplomatic Security folks)… 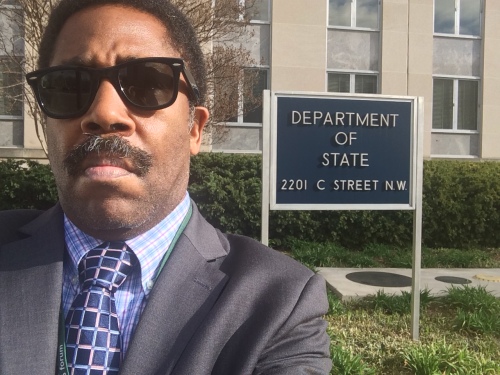 There were two responses to this picture.  My friend commented that I wasn’t smiling, and looked upset and grim.  (No, it was a combination of pain from the doctor checking on my nose, and just thinking hard about what I needed to do.)  So, I took another picture, with a smile and a different background (the National Academies building across the street): 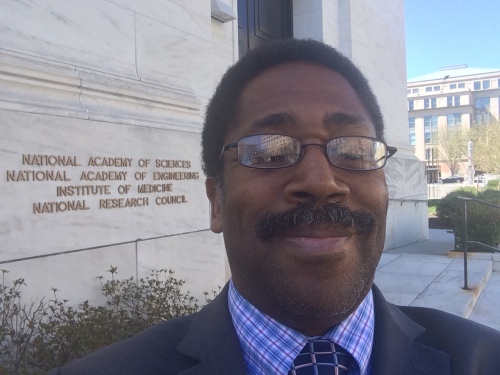 The second response was my own.  For somewhat surprising reasons, I recognized in that picture a reminder of my research career.  Compared to many psychologists and engineers, I spend a lot of time doing “fieldwork,” including a research method known as “participant observation” (where one spends time “embedded” in another culture or organization, working alongside of the regular people living that other life, in order to learn what’s important to them and how they come to view things—and not make foolish errors about what designs will or won’t work for them, or what their daily challenges are).   Of course, cultural anthropologists might laugh at my calling this “fieldwork”: I’m not living in a hut somewhere 15 miles from the nearest paved road.  But it does mean that much of my data and thinking comes from talking to people who are not me, and don’t have my world view—they’re not designers or researchers about systems, they’re performers in, or users of, the systems that I study.  They may or may not reflect on how and why they do what they do.  I’m fundamentally an outsider to those aspects of their organizational and social culture.  (This is something that I’ve experienced for most of my life.  More on that later.)

That insight quickly spawned a new one: the Department of State is the third federal government agency in which I have functioned as participant observer since I began my graduate research career over 30 years ago, for weeks or months at a time.  My prior agencies were the National Park Service (NPS), and NASA.  What is profoundly interesting about that collection of agencies is that they are profoundly mission driven, and have a great deal of unique visibility.  (It’s said that a former Secretary of State defined their job, and the role of the Department in general, as “explaining the U.S. to the rest of the world, and explaining the rest of the world to the U.S.”)  NPS is there to conserve and protect our natural and cultural heritage for future generations.  NASA brings the universe to us, and takes us further out into the universe.  (Yeah, I want more of that.) 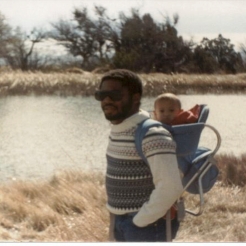 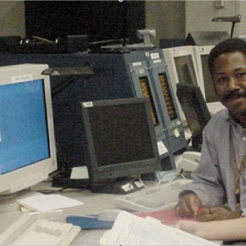 I recognized as well that these are very romantic, idealistic views of the world and what we should be doing in and with it.  Managing occupational safety, or confirming regulations over drug approvals, or ensuring people pay their taxes on time are in fact really important features of living in a complex society that is also a safe and healthy one.  The folks who work there even have their official seals and logos and organizational cultures.  However, I dare say that they do not capture the cultural imagination and romantic vision of the following:

The challenge for romantic idealists is that they can get caught in their ideals, writing scripts for the movies that play in their own heads.  I find myself doing this a lot, and maybe it’s a remnant of having a very vivid, broad imagination as a kid, combined with living in and between multiple cultures just a few miles from each other in Philadelphia.  Not surprisingly, I caught myself a few days ago in such a “movie script” moment: I was writing a document, and imagining the cheers of a crowd as a “VERY SENIOR GOVERNMENT OFFICIAL” finishes an announcement and walks off the stage, shaking my hand and thanking me for putting together such an excellent policy.  (It’s kind of like the scene in the movie, “A Christmas Story,” where Ralphie imagines an enraptured teacher marking a series of “+” after the “A” grade on his essay.  I’m actually not that fond of the movie, but given the number of times it plays each December, it’s hard to avoid seeing the scenes again and again.)  That is a nice movie scene, but in truth, it’s very rare that a solo author of a policy really gets the policy enacted, or their work acknowledged, in such a direct way.

When I get myself out of the movie and start to re-examine the real world (even the biographical movies, such as the recent hit, “Hidden Figures,” are not piecewise accurate, nor were they filmed in real time), I really need to bring myself back down to the ground and face the harsh reality… or is that a mistake, too?  Consider the list above.  I have been that ranger, and worked directly with them, working in the backcountry and the visitors’ center.  I have been that engineer, working with those astronauts and flight controllers and flying in the vomit comet.  And just this week, I was that diplomat, working to support the international relationship as a member of a country desk and enjoying a conversation at the Ambassador’s residence.

Am I enjoying my experience?  Do I think it’s worth it?  I keep getting asked that question, and the answer is even more true now than it was six months ago: without a doubt, this is one of the most important adventures and educational experiences I could have had at this stage of my life and career.  These are lessons I could never learn if I stayed in the lab, no matter how brilliant or talented or hard working I might be there.  The realities of these experiences themselves are amazing and precious and valuable beyond my ability to fully recognize in the moment.  (Yes, it was ideas that I observed and learned and developed at NPS and NASA that have influenced the papers I’ve shared and work that I’ve been able to present while I’ve been here at State.)  There is yet more for me to learn, and do, and integrate, as I continue to experience a world and career filled with opportunity and danger and change.

Not bad, as they say… for government work.