Sundials and stelae.  Stonehenge.  Tulum.  Humans use artifacts and architecture to help mark the passage of the seasons and celebrate calendar landmarks.  Some are purpose-built; others, although not originally designed to reference a particular celestial passage, take on their own significance as reminders of the lengthening and shortening of days.  (One of my favorites, of course, is the alignment of the sun along the Infinite Corridor: not just a geek-enriched celebration, but a bi-yearly marking of the darkest weeks at the bottom of the year in Cambridge.)  I have now learned enough of the patterns of my home in Lafayette to note the seasons as the sun transits the windows and doors of the house from east to west, spring to fall.  Near the Spring Equinox in March, the sunrise tracks down the hallways, and makes prisms through the windows that fall on the far walls.  The return of longer days, late sunsets, and warm breezes seem to grant me additional energy and enthusiasm for projects and innovation: six good months are here, until the Fall semester and Equinox return in August and September.  (Or so I thought, back in May, when I wrote the first draft of this entry.  It’s mid-June now, so I’m down to five warm and good months.  It’s also just a bit less than 500 days for total mission duration, as I will point out later.) 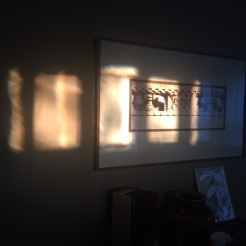 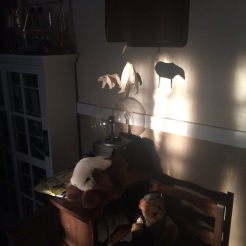 Figures 1,2.  Springtime prisms on the walls.

Interestingly, the sunlight this spring felt especially auspicious, even though we still had snow well into April.  (A lesson for me, that I respond to the quality of light, and not just the outdoor temperature.  Snowfall on the still-bare trees, framing a brilliant blue of sky, was still a treat for me, and an encouragement to “get to it”.)  So, what is compelling my energy and enthusiasm now?  As I mentioned in “Origin Story,” I had the opportunity to see the crew of Apollo 8 in Chicago a few weeks ago, relating some of the story and observation of what it was like to be on that mission, and how much that experience changed—not just them, but the lives and thoughts and dreams of so many others during the bleak pains experienced in 1968.  You mean, all of that was 50 years ago?  Of course, it sounds like distant history when I say it, but it feels like near and precious memory.

Calendars and anniversaries seem to carry special significance, particularly with base ten multipliers.  Fifty years.  A half a century.  A golden anniversary.  That is the basis of special celebration.  A century plus fifty?  Longer than human lives, an announcement of longevity and recognition of legacy, although a bit more difficulty to say or spell: a sesquicentennial.  Combined, there is a sense of serendipity and convergence, and I must admit, a celebration of purpose and precious acknowledgement of the prettiness of what can be achieved with an integration of purpose and imagination and fierce determination.  Even the celebration becomes itself such an integration.

A few years ago, the campus put together a proposal to create a Center for Human Imagination; I was inspired by the effort, and wrote a series of vignettes centered on such a convergent celebration, being held as part of the Purdue 150th Anniversary, on the 50th Anniversary date of the Apollo 11 Moon Landing: July 20, 2019.  The Center never came to be, but in some ways, I have it even better now: There’s no need to worry about the Center’s activities, and indeed, the celebration of “One Giant Leap” can expand to encompass multiple Giant Leaps, looking forward as well as to the past.  I can think of no greater experience of my passions than to be “Flight Director” for such a mission of celebration and imagination.  The world will celebrate July 20, 2019, and Purdue is a natural focus of that attention.  By mid-October, Purdue’s celebration of its legacy and look to the next 50 – 150 years with a look to past and future in exploration and space.  Yes, these are concepts Passionately Felt.  But a successful mission requires more than passion.

Elegantly Crafted: It takes something special to walk into a room and present a plan to do what others might even fear to imagine.  But, well-crafted, the pretty math and elegant design wins out.   The fictional rescue plan in The Martian could only be the design of… (insert awe-struck whisper of appreciation and respect): “a steely-eyed missile man”.  But we don’t have to rely on fiction.  The Apollo 8 lunar insertion trajectory was no less a work of elegance, crafted only a few months before the mission.  And don’t forget Kathryn Johnson, our quintessential “steely eyed rocket woman” who crafted the math to bring John Glenn back home.

Excellently Executed:  Also in “Origin Story,” I described the challenge of the hero living their life forward, not knowing if this is the moment that creates the legend (what legend?) that the screenwriter will weave into our dreams.  Preparation, talent, desire, opportunity… In sports, maybe you are remembered as the player who made that amazing shot to win that game… and then, two days later, you did it again.  Or maybe you’re a test pilot, trusting an “extra gallon or two” in the tank in the face of “1201 alarm” and “30 seconds”.

Why do I want to be Flight Director?  I love making connections.  I thrive on bringing the pieces together.  They’re not all my pieces, and none of this is just one person’s story.  It’s certainly not just about the one moment of peak experience.  There are many moments, and several hundred days, available between now and late October, 2019.  (Just a little short of 500 days, you might not be surprised to know: just enough time for some beautiful orbital mechanics and gravity assist to get all the pieces in place.)  They don’t happen all at once, and I mustn’t ignore their beauty when I find them.  Perhaps a piece of crafting becomes visible in the shower, steam and water vapor glistening as the sunset shines through my bathroom window.  No, that won’t happen every day.  It requires alignment, and notice.  And a few good days, weeks, and months.

Figure 4:  Alignment of the light.